Some weeks ago I was in Huntington Beach California, a four-hour plane ride from my home of Detroit.  I was in Los Angeles for business and took some time to relax.  Whenever I get the chance to do so, I surf.  I am, I admit, the world’s worst surfer but as it is an individual (as opposed to a team) endeavor I reason that my poor surfing skills are no one’s problem but my own. As it happened, the beach had been closed the previous weekend as a result of one surfer’s encounter with a particularly aggressive Great White shark.  The surfer wasn’t harmed (nor was the shark for that matter) but as a matter of precaution the beach was closed.

The days that I were there the beach was crowded, it being a hot and sunny day, but there were no surfers and scant few swimmers.  Those who did choose to go into the water chose to stay in water that was knee-deep at best.  I paddled out.

For some, surfing in shark-infested waters may seem foolhardy, even reckless.  But for me the fact that I so seldom get an opportunity to surf far out weighed the incredibly remote chance that I would encounter a shark let alone be attacked by one.

Was my behavior at risk? To be sure, it was.  But was it reckless? Or even unsafe? Well…I don’t believe so.  Recently I read a book about workplace safety.  Like most of the self-published dreck that is churned out in the name of safety it was obvious the author had never worked in an industrial setting.  The author (and I am deliberately withholding the title and author, not because I fear reprisals like lawsuits or customers deserting me, but because I honestly think much of the book is dangerously stupid advice that would do more harm than good and I don’t want to promote it) cites “thrill seeking” as a principle contributor to unsafe workplaces.  Of course the author has no research to back up his position and most of the book is seemingly based on one man’s opinion (and if that is what the author intended he should have written a serious of blog articles instead of a book, but that’s neither here nor there.)

Identifying thrill seeking as a causative factor in worker injuries is, in my opinion, simply another way of blaming the injured party for getting hurt.  As Dr. Robert Long says, “Risk makes sense” (numerous times in his book of the same name, which I do recommend, not because I agree with it (I do, but that is beside the point) but because it cites reams of research that supports his positions.)

While it makes a great story, surfing with the sharks, wasn’t thrill seeking.  If I believed that I was in serious jeopardy of a shark attack I wouldn’t have paddled out.  In fact, the local authorities publicly stated that they didn’t believe there was an elevated risk, but warned that surfers and swimmers should be more watchful for sharks and if one should make an appearance cut it a wide berth.  So I reasoned (correctly it would seem) that I was not in any more danger than I normally would be (primarily from sports injuries or drowning).  My behavior wasn’t “thrill seeking” in that I derived no extra adrenaline-induced pleasure from my surfing (in fact the waves were soft and crappy, but everything is better wetter as they say.

Are there crazed adrenaline junkies who are recklessly pursuing a rush by being reckless? Sure, but what percentage of your workforce is comprised of these people?

We as safety professionals have to stop treating 100% of the population like they are thrill seeking halfwits when less than 1% actually are.  We need to weed those people out of our workplaces (I honestly don’t believe you can coach someone out of daredevil behavior) but we also have to recognize the limits of what we as safety professionals can safely require. Take Personal Protective Equipment (PPE) for example.  I know of one safety professional who wanted to require electricians to wear head-to-toe fire resistant clothing while changing light bulbs!  Before you defend this requirement let’s think about this.  While it is certainly possible that one could be burned changing a light bulb, how likely is it that someone changing a light bulb is going to be burned by an arc flash? Given that in my 30+ years working in industrial settings I have never once heard of a case of this happening I am going to say the possibility, while real, is extremely remote.  Add to that the fact that the duration of exposure (how long is a maintenance worker exposed to the possibility of an arch flash from a light fixture (that is supposed to be powered off during the changing)? Some would argue that the length of exposure is considerable, but I think these people are plain dead-ass wrong.  If we were to pie chart all of the activities spent by a maintenance worker the amount of time he or she spends changing light bulbs (in an industrial setting) would probably be so small that it would be unrecognizable on the chart.  Of course, in those cases where there IS an arc flash the severity can be cataclysmic, but there are better ways to mitigate those risks than to require full fire resistant clothing for all maintenance workers. Hell if it is THAT big an issue the organization could simply require it be worn when changing light bulbs.

Too often we exaggerate the risk of a hazard and categorize what is merely possible as probable because it is easier to enforce than if we make an honest assessment.  Some safety professionals, in the name of “zero-injuries” will heap regulation after regulation on a job until the organization rebels and simply refuses to comply.  When it comes to making the workplace safer, the more complex and/or burdensome the solution the far less likely the compliance.  We have to understand that there are limits to the amount of protection we can provide to people and if when exceed the perceived reasonable limits we not only fail to protect in that instance but we lose credibility and jeopardize compliance with safety protocols that are essential for basic safety. 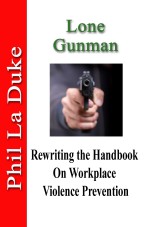 Click to order, I Know My Shoes are Untied, Mind Your Own Business! 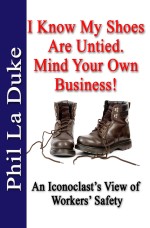 Order The Book on Amazon!

Weekly up dates on Phil's Rants and Writing.

La Duke in the News